Over the years I have had the opportunity to use and be exposed to a number of different types of project planning methodologies. In the beginning I was an early fan and use of the Microsoft Sure Step Methodology. But that approach of a waterfall method has fallen by the wayside and been replaced by more agile methods for software development.

At CRM Innovation we generally follow one of two approaches. For our small and medium size client implementations we generally break the project down into definable components and attack them individually. Kind of a waterfall approach (we gather all the requirements for that deliverable up front) but in bite size individual chunks usually deliverable in 2 weeks or less. The other scenario is where we participate in a project with a large client and we typically become a team member in their approach.

So while I have been exposed to the Scrum process applied to Dynamics 365 projects, I never had any formalized training in running a Scrum. I am now involved very heavily in a project that fully utilizes the Scrum agile framework and Azure DevOps. Consequently, it was time to get some formal training. I reached out to fellow MVP Neil Benson and signed up for his online training program- Introduction to Scrum for Dynamics 365.

The course ran about 5 hours or so including taking the quizzes. I haven’t taken the practice exam yet.

I found the course engaging and very relevant to the Dynamics 365 world. Throughout the course Neil provides insights and examples of how he has used Scrum successfully in the projects he has been involved in. This also includes lessons learned when things didn’t go as planned or expected. The videos include visuals and accompanying audio instruction along with Lego characters. I will admit that I originally thought the use of the Lego characters were kind of hokey. But as the lessons continued I found myself looking forward to the seeing the characters used in the next set of lessons. They actually do make the training a little more fun to watch and listen to.

I would heartily recommend this course to any developer, functional consultant, product owner, or group manager that is involved in any Dynamics 365 implementation or customization project!

I am looking forward to doing some more training in the Scrum methodology and plan to take the Scrum Master exam. 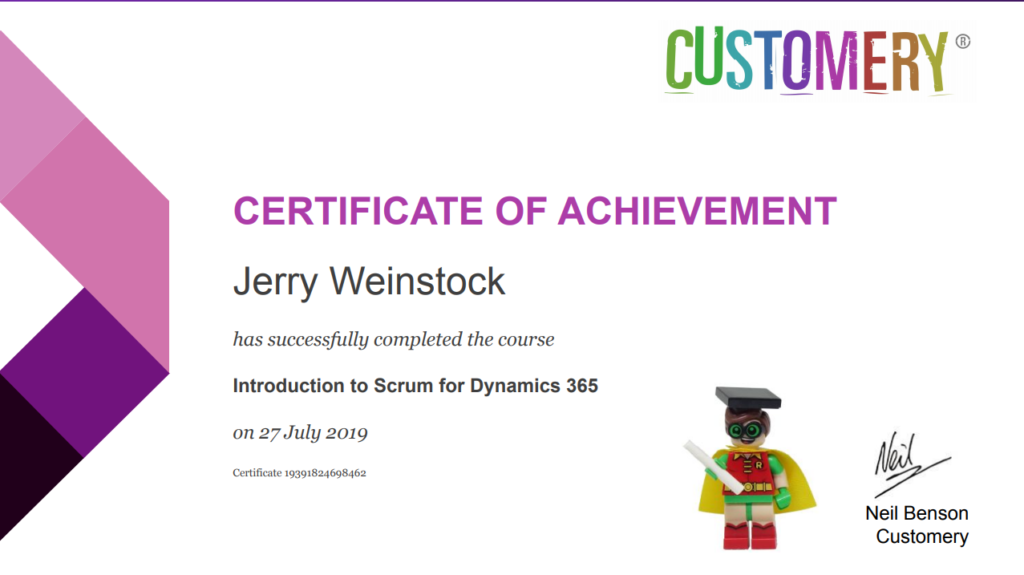 Disclaimer: It is true that Neil and I are friends and he gave me a complementary subscription to the course as a fellow MVP. However, Neil and anybody else that knows me would know that I can’t be bought, I was going to call it as I saw it, and the comments above reflect my true perspective on the value of the course.